The Splunk Universal Forwarder Agent (UF) allows authenticated remote users to send single commands or scripts to the agents through the Splunk API. The UF agent doesn’t validate connections coming are coming from a valid Splunk Enterprise server, nor does the UF agent validate the code is signed or otherwise proven to be from the Splunk Enterprise server. This allows an attacker who gains access to the UF agent password to run arbitrary code on the server as SYSTEM or root, depending on the operating system.

This attack is being used by Penetration Testers and is likely being actively exploited in the wild by malicious attackers. Gaining the password could lead to the compromise of hundreds of system in a customer environment.

Splunk is a data aggregation and search tool often used as a Security Information and Event Monitoring (SIEM) system. Splunk Enterprise Server is a web application which runs on a server, with agents, called Universal Forwarders, which are installed on every system in the network. Splunk provides agent binaries for Windows, Linux, Mac, and Unix. Many organizations use Syslog to send data to Splunk instead of installing an agent on Linux/Unix hosts but agent installation is becomming increasingly popular.

Universal Forwarder is accessible on each host at https://host:8089. Accessing any of the protected API calls, such as /service/ pops up a Basic authentication box. The username is always admin, and the password default used to be changeme until 2016 when Splunk required any new installations to set a password of 8 characters or higher. As you will note in my demo, complexity is not a requirement as my agent password is 12345678. A remote attacker can brute force the password without lockout, which is a necessity of a log host, since if the account locked out then logs would no longer be sent to the Splunk server and an attacker could use this to hide their attacks. The following screenshot shows the Universal Forwarder agent, this initial page is accessible without authentication and can be used to enumerate hosts running Splunk Universal Forwarder. 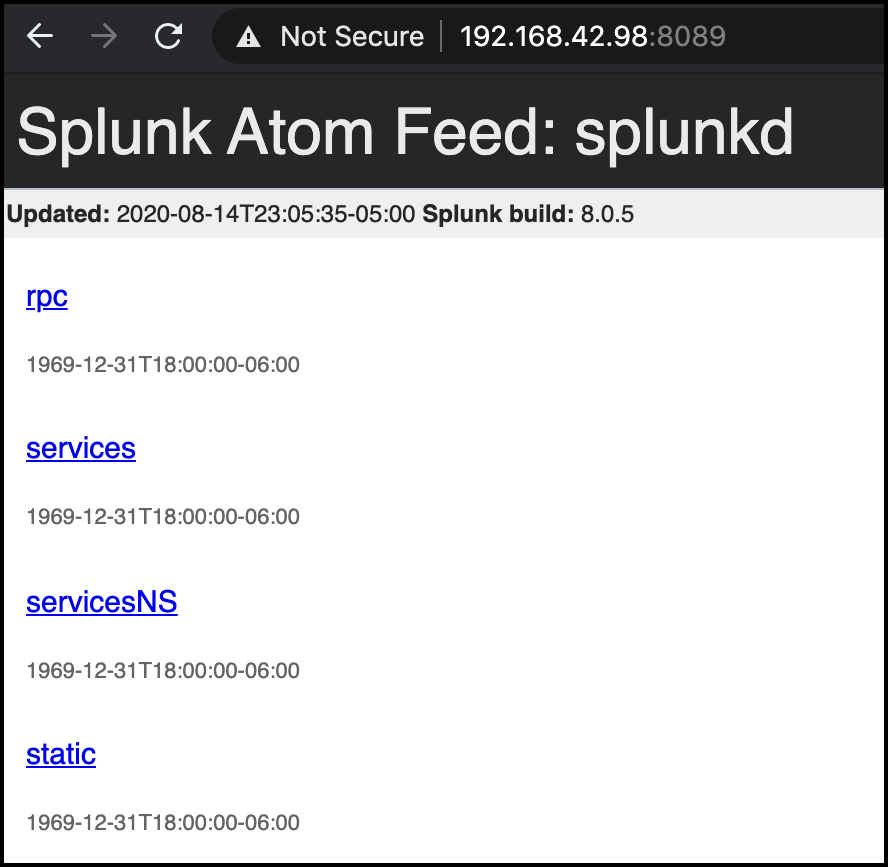 Splunk documentaiton shows using the same Universal Forwarding password for all agents, I don’t remember for sure if this is a requirement or if individual passwords can be set for each agent, but based on documentaiton and memory from when I was a Splunk admin, I believe all agents must use the same password. This means if the password is found or cracked on one system, it is likely to work on all Splunk UF hosts. This has been my personal experience, allowing compromise of hundreds of hosts quickly.

The password can also be accessed in hashed form in Program Files\Splunk\etc\passwd on Windows hosts, and in /opt/Splunk/etc/passwd on Linux and Unix hosts. An attacker can attempt to crack the password using Hashcat, or rent a cloud cracking environment to increase liklihood of cracking the hash. The password is a strong SHA-256 hash and as such a strong, random password is unlikely to be cracked.

An attacker with a Splunk Universal Forward Agent password can fully compromise all Splunk hosts in the network and gain SYSTEM or root level permissions on each host. I have successfully used the Splunk agent on Windows, Linux, and Solaris Unix hosts. This vulnerability could allow system credentials to be dumped, sensitive data to be exfiltrated, or ransomware to be installed. This vulnerability is fast, easy to use, and reliable.

Since Splunk handles logs, an attacker could reconfigure the Universal Forwarder on the first command run to change the Forwarder location, disabling logging to the Splunk SIEM. This would drastically reduce the chances of being caught by the client Blue Team.

Splunk Universal Forwarder is often seen installed on Domain Controllers for log collection, which could easily allow an attacker to extract the NTDS file, disable antivirus for further exploitation, and/or modify the domain.

Finally, the Universal Forwarding Agent does not require a license, and can be configured with a password stand alone. As such an attacker can install Universal Forwarder as a backdoor persistence mechanism on hosts, since it is a legitimate application which customers, even those who do not use Splunk, are not likely to remove.

To show an exploitation example I set up a test environment using the latest Splunk version for both the Enterprise Server and the Universal Forwarding agent. A total of 10 images have been attached to this report, showing the following:

At this point I have persistent access to the host both through Splunk and through the two user accounts created, one of which provides root. I can disable remote logging to cover my tracks and continue attacking the system and network using this host.

I recommend implementing all of the following solutions to provide defense in depth:

** Note: ** This issue is a serious issue with Splunk systems and it has been exploited by other testers for years. While Remote Code Execution is an intended feature of Splunk Universal Forwarder, the implimentaion of this is dangerous. I attempted to submit this bug via Splunk’s bug bounty program in the very unlikely chance they are not aware of the design implications, but was notified that any bug submissions implement the Bug Crowd/Splunk disclosure policy which states no details of the vulnerability may be discussed publically ever without Splunk’s permission. I requested a 90 day disclosure timeline and was denied. As such, I did not responsibly disclose this since I am reasonably sure Splunk is aware of the issue and has chosen to ignore it, I feel this could severely impact companies, and it is the responsibility of the infosec community to educate businesses.